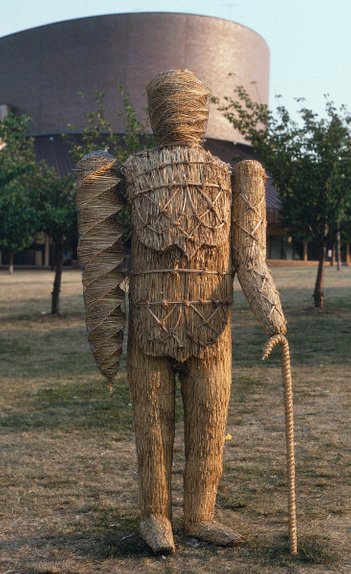 A series of straw works, still a current interest, was initiated while living near Washington DC in the 1990s. During this time censorship of the arts was a hotly debated issue, particularly regarding the work of Andres Serrano and Mapplethorpe. My figures are inspired by a combination of English Corn Dolls and Appalachian corn-husk dolls and were exhibited in a multicultural context where artists created doll-like figures that make reference to their own particular heritage. The metaphor of 'straw man' has many meanings. I am particularly interested in the US usage which refers to a corporate fall guy- someone set-up to take the blame for a political conspiracy or intrigue.

In terms of language a straw man argument is a rhetorical device- a logical fallacy, and a straw horse proposal is intended as a test or a ruse, one that will be knocked down, then revised.